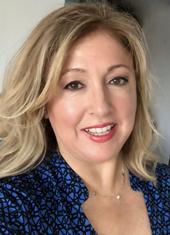 My career as a professional makeup artist for film and TV was influenced by a background in art, acting and an airline job as an international flight attendant for a major carrier.

The airline relocated me to New York City from my hometown, a small suburb of Chicago, with two boxes and a dream to become an actress. In between flight assignments, I was able to take acting classes, attend auditions, and from time to time, I landed some stage work, commercials and performed with several improv groups.

As a former student of School of the Art Institute of Chicago and wanting some discipline to continue my painting, I enrolled in School of Visual Arts in NYC. Not long after, I was included in a group show "360 E-Venti" at Pino Molica Gallery in Soho, NY and Rome, Italy.

My artistic ambition was fueled. It led to work behind the camera in the art department for a small, independent feature film. To my surprise and delight, I was given a small role. While I was in the makeup chair, I found myself drawn to the idea of becoming a makeup artist for film and decided on my next pursuit.

I returned to SVA but this time, I enrolled in a Special Effects makeup class taught by the late Kelly Gleason, master of Special Effects makeup. Just before semester's end, very early one morning, I received a career changing call from her: "What are you doing?" she asked. I replied, "I'm sleeping." In a dry voice she said, "Do you want to be a makeup artist today?" After racing across town with my brand new makeup kit, my career as a professional makeup artist began that very day and coincidentally, on my birthday.

The next month, my name was passed along to a production company and I was given the opportunity to do makeup for a period short film which was shown in the Fort Lauderdale International Film Festival. The same producer liked my work and offered me a position as key makeup artist for a full length feature film. My word of mouth career happened very quickly and has kept me working nonstop for the past 20+ years in NYC.

I'm currently living in NYC and available for travel in the tri-state area and beyond.